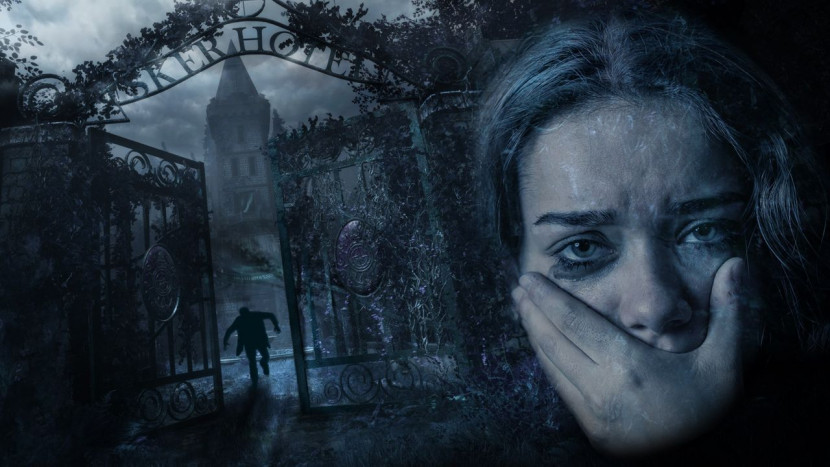 Maid of Sker is a new story from developer wales interactive and tells a story of welsh folklore in a horror style game with a fresh twist on sound and stealth gameplay. Being a guy who has never really dabbled in the horror genre I was surprised at how much I enjoyed myself with this game and how quickly it has captured my imagination.

The story of the game sees you playing as a man named Thomas boarding a train to the mysterious hotel Sker in search of your love elisabeth who had gone to the hotel to help her family re-open it. Once you have arrived you realise something supernatural and evil has befallen the hotel Sker and its your job to undo the evil and save your lover.

The ambience of the Hotel Sker is incredible, the mood as you transition from colourful but desolate Sker point into the dank and dark hotel and grounds is jarring but serves the purpose of reminding you how unnatural this all is. Enemies are mostly mindless drones with sacks over their heads, while they cannot see you they can indeed hear you very well and have the typical strength and speed of a supernatural being you would expect. Most of the puzzles of the game revolve around you slinking through the grounds of the hotel looking for specific switches or keys to locked doors whilst evading detection.

The gameplay loop and world theme remind me of Bioshock, but without the bombastic action or weaponry, instead, you will treat each enemy as if it could kill you in a moments notice but with no context clues on the screen to show whether an enemy has seen you or not I spent a lot of time just standing still and waiting for enemies searching animations to end before moving on. Instead, you will need to focus on the audio cues of the game, which can be a challenge when you are also listening to the ambient noises and music of the game which is there a lot of the time. The room puzzles are satisfying and tie into the hotel well overall but there is a need to backtrack when I don’t feel there really should be. On a few occasions i had to interrupt my progress on one floor to go to another to open one locked door to get one thing to return back to where I was.

The stealth mechanics and map traversal are probably the biggest disappointment in the game, other than the aforementioned lack of context clues on the screen to show enemies awareness of you there is also a lack of ability to see properly what you are walking over which can create noises you weren’t intending to make. Mix this with the fact that Thomas seems to be glued to the floor and cannot even vault or step over objects higher than his knees and this creates a frustration in navigating the environments in a way you think you should be able too. I cant tell you the amount of times I got snagged on a branch in trying to outrun the enemies and simply died respawning at a save point.

On the save points I am feeling mixed about this, there are special safe rooms in the Sker hotel grounds marked by green ornate doors and with phonographs to record your save but also provide context, lore or other backstories from the characters in the game. Whilst this is an interesting way to do checkpoints I couldn’t help but sometimes feel like a worker bee sometimes moving around a zone and returning to my safe room every few minutes or so, lest I lose all my progress in solving the puzzles.

In the time I have played I have encountered what I consider to be “boss” style encounters, I am sure there will be a couple more as I move onto defeating the big bad but I can’t help but feel that combat is significantly lacking. I am aware that this is a conscious choice by the developer and fits within the heroes arc of being a mild-mannered pacifist who would like to solve all this by completely non-violent means. The game also presents an evasion tactic of holding your breath and a sonic device to stun enemies, but the ammo for the device is too thin and the breath-holding is too cumbersome sometimes to be effective. Start the process too early and your breath runs out and a gasp for air alerts everyone to your presence, start it too late and you find yourself attacked with no defence because you are stun locked.

Overall if you can look past its flaws Maid of Sker provides a fun little romp through a setting haunted by the physical supernatural. Unlocking your path forward can be a rewarding experience but you may need to endure a few trial and errors to get there. The story is serviceable but predictable and is saved by the fantastic realization of the backdrop in which your playing. A serviceable game that will definitely find an audience.

0 comments on “Review: Maid of Sker – A Nervous Walk Through Narrow Halls”