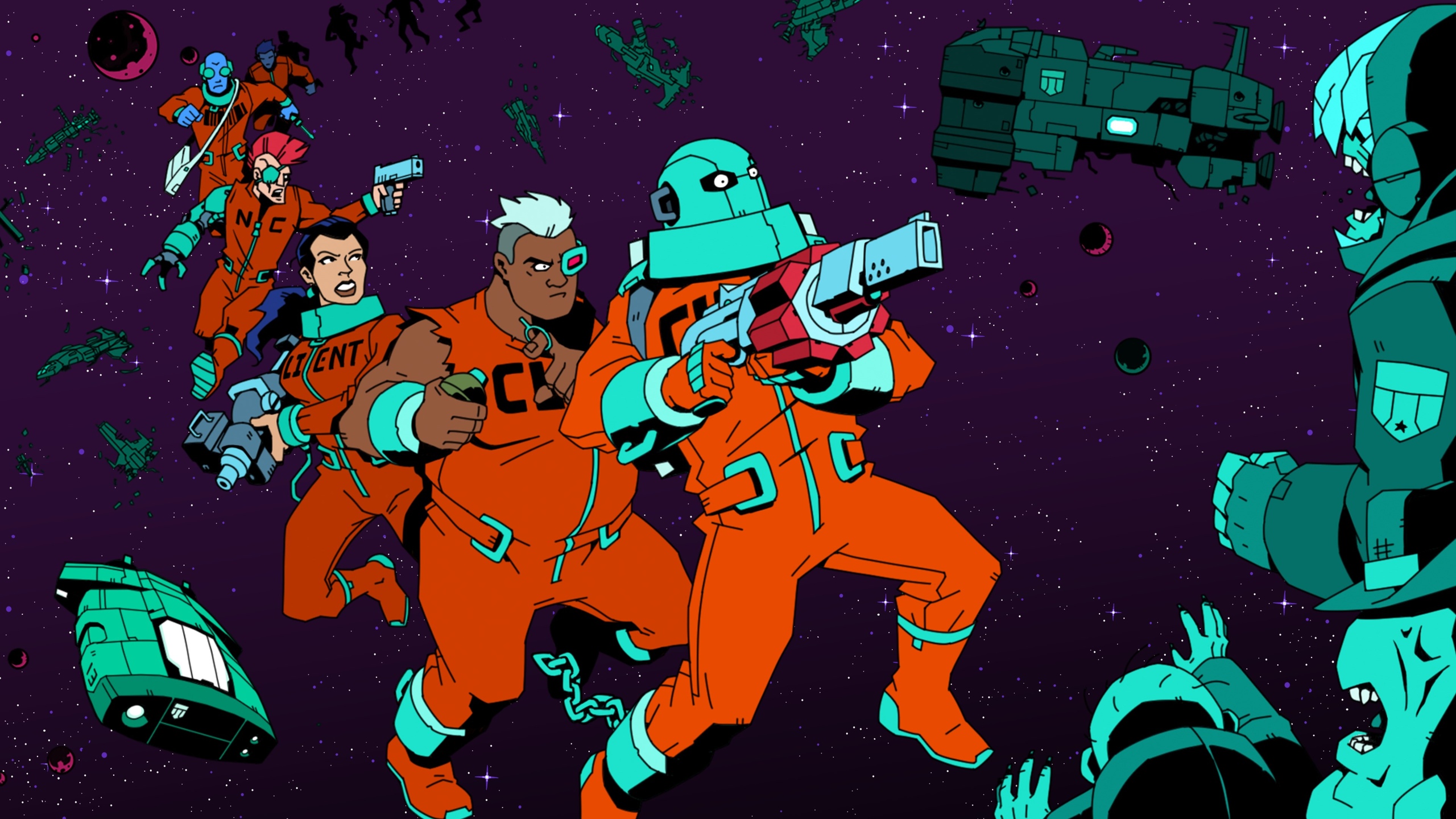 Going back to X018, most people fondly remember the continuous stream of Xbox Game Pass titles throughout the entire Inside Xbox @X018 Livestream. Games of all sizes and scopes but one game, in particular, stood out to me. A concept that on paper sounds exactly like the type of game that I’ve been wanting to play for such a long time.

Void Bastards quite literally stole the show for me. The announcement trailer featured a comic-book looking art style that fondly reminds me of the “XIII” licensed videogame made by Ubisoft in the early 2000s for Xbox and PS2. Later that year, I’d name Void Bastards as one of my most anticipated titles for 2019.

The game is developed by Blue Manchu Games and had most notably Jonathan Chey on the team. Jonathan was one of the co-founders of Irrational Games which was the development studio for all three mainline Bioshock titles before it was closed down in 2015. It is no coincidence that many people immediately felt that Bioshock/System Shock vibe when watching the announcement trailer with many outlets referring to this big franchise when talking about Void Bastards.

On May 28th, the game was finally released on both Xbox One and Windows PC. I saw more and more people mention this game on twitter thanks to it being available on Xbox Game Pass. Similarly to Outer Wilds (which released the day after Void Bastards and was also included in Xbox Game Pass), the game has gotten a small but dedicated fan following that stuck with the game and wanted to see more and more other people get into this crazy looking shooter.

In Void Bastards, you play as one of the clients in this wide galaxy. One of the gimmicks in this game is that when you die, your character is pretty much dead and you’ll be immediately transferred into a different client’s body. And that leads us to one of the special things about the game: roleplaying elements.

Every character has it’s own set of randomly generated traits. There are positive traits such as being able to see all the important resources immediately from entering. There are also negative traits such as colourblindness where everything you see is grey. Some of the traits can be used to your advantage while also giving you a disadvantage. A perfect example of that would be a trait where you’re the size of a dwarf giving you the ability to sneak behind covers and surprise the enemy. The disadvantage is that it certainly restricts your vision. This system allows a certain level of depth that can be used in multiple ways.

In order to upgrade your character, you’ll need to collect items that are scattered all over the Nebula. Items that allow the player to use special weapons such as the kittybot. This is a robot with a kitty-face that detonates when it gets close to enemies. Other items give you more health, upgrade your movement speed or allow you to survive longer in radiated areas.

A galaxy filled with thieves and weird-looking space agents.

The end objective is to escape the nebula. Simple objective but the road is filled with space pirates and hostile blobs of goo. Also, space agents that are looking to murder you so you better watch your back.

You’ll travel across several galaxies looking for items that will help you throughout your quest for escaping the nebula. This is where your S.T.E.V. comes into work. This is a fancy word for your space vessel that you’ll be accompanied with for the entire game. To keep the S.T.E.V. afloat, you’ll need fuel which can be found in space stations across the galaxy. You also need to maintain a good portion of food. If you run out of food, you’ll die and so a new client will spawn.

There are also hazards in this galaxy. Meteorites, void whales and the terrifying space pirates which will ruin your clients day. You can, however, use the environment to clear out these hazards. For example, you are able to use these meteorites against the space pirates.

Before entering a space station, you’ll be given all the different sorts of enemies that you’ll encounter in that level. This gives you the opportunity to prepare yourself with the right tools for the job. You’ll also be given several penalties or benefits that space station offers. This is something that you most of the times can’t prepare yourself for so you’re gonna need to be creative in order to survive the hostile enemies.

Once you enter a space station, you’ll be playing as your client in a first-person perspective. Every space station plays out differently. Some of them might have the power cut out where you’ll need to be looking for the generator first. In others, you’ll have to avoid the radiated pools of acid and the (I’m not making this up) trippy looking mushrooms that do make you feel dizzy.

You will encounter plenty of enemies throughout your journey. From regular enemies like the janitors and turrets to the dangerous Screw enemies who can attack you with their heavy spike attack. When you’re surrounded by these deadly foes, the game can feel insanely tense in where you’ll want to do anything in order to just survive.

The game can get a lot more challenging when space pirates join the fight. These pirates have high damage bots that can shred you to pieces if you’re not careful. When boarded, you’ll need to remove the boarding plugs in order to escape this threat.

Depending on the RNG, there is even a chance that some enemies upon entering the space station will be friendly. There was this one level where I had my very own army of space tourists.

Tense moments are accompanied by some amazing atmosphere. Rooms will turn dark, you’ll hear the screaming enemies in the distance and the music just kicks complete ass. The soundtrack is without a doubt one of my favourite aspects of this game. It’s able to create both a calm and isolation-focused atmosphere but also tense and chaotic action setpieces.

A massive shout-out to Ryan Roth who composed this amazingly good soundtrack!

I absolutely enjoyed my entire playthrough of Void Bastards and writing this article, I’m already looking forward to discovering more in this wide universe. The combination of tense gameplay and an amazing atmosphere makes this game an absolutely great experience.

The game launched May 2019 on Xbox One and PC with the inclusion of Xbox Game Pass. An age rating for the PS4 version has popped up very recently so there is a big chance that the game will be coming over to more platforms in the near future. Since launch, the game has received DLC updates featuring new enemies and challenge modes.